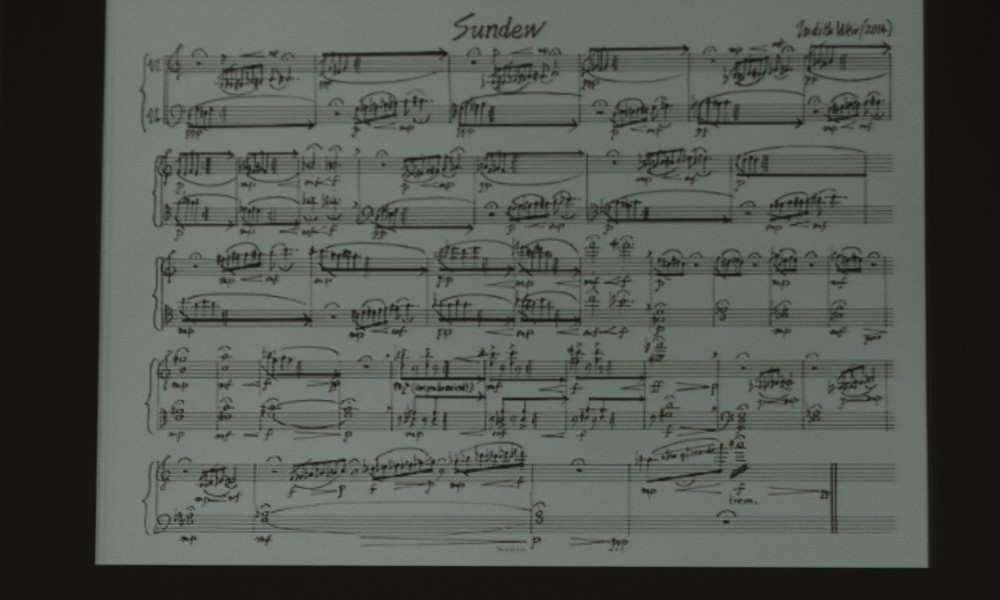 As her talk focused fundamentally on the ideas of notation in music, I was particularly interested in the variety of ideas which she put forth. She painted the picture that a piece of music shares similarities with a piece of artwork, and using her own example of ‘Sundew’, which is a violin/cello duet, she showed us how by removing the note-heads and providing a general shape of each phrase with lines or arrows, a similar piece was produced by the performers. I found this idea very interesting, as I realised how simple a notation system could be, and I think this may be an idea to develop in the future for a piece of my own. I specifically liked that by abstracting some of the details about the music if you have given a clear idea about the inspiration/emotions in your composition it is possible to gain a clear performance, whilst also allowing for the performers to add some of their personality.

I also really enjoyed the discussion she had on how repetitions can be used effectively, drawing upon examples of minimalism such as Steve Reich’s ‘Piano Phase’, and how a large amount of material can be devised from a small amount of notation. This again attached to the idea of maintaining a clarity of compositional thought. I learned here that sometimes it is better to spend more time thinking and less time notating to gain what you are looking for. Personally, in the event, I would have wished for a few more performances of pieces, as I wished to learn a bit more about how Judith Weir composes herself, and a couple more of her pieces would have helped a lot. I also thought that a few more examples of less-conventionally notated piece should be shown, such as with graphic scores.

However, the main learning point was that conveying a musical idea should not just be restricted to the most common notational forms. Judith Weir’s talk has inspired me to look beyond what I’d consider to be conventional, and I would recommend the talk/performance to anyone considering writing their own music, as I think its invaluable learning about the variety of ways in which notation can be interpreted. It also provided inspiration for these extended notation styles. Specifically, I was encouraged to look at more minimalism, such as Philip Glass’ ‘Concerto for Saxophone Quartet’, and how a simple performance direction can lead to many minutes of music such as in Steve Reich’s ‘Violin Phase’.