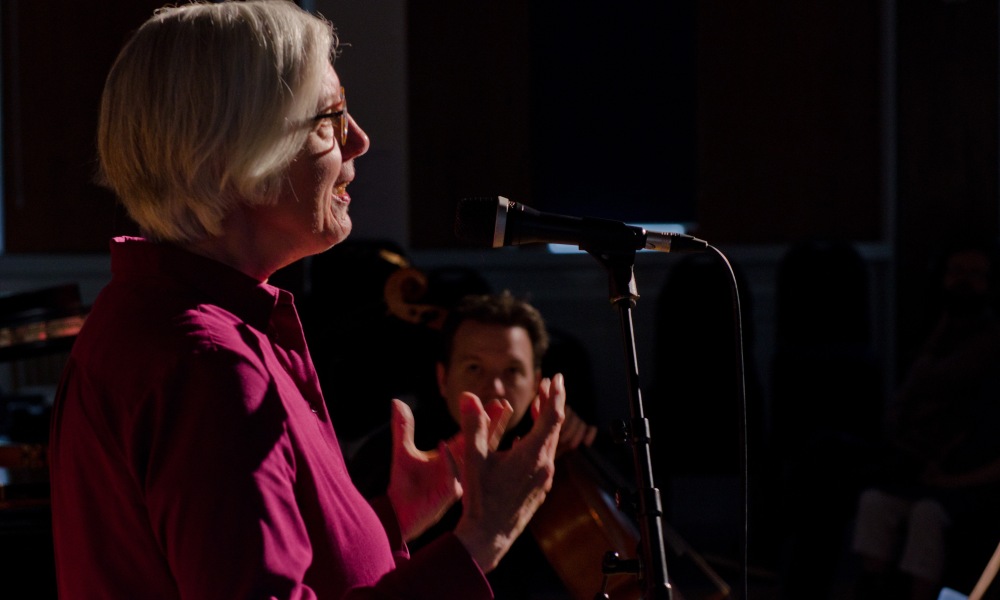 Our guest-lead workshop yesterday evening was delivered by none other than master of the Queen’s music, Judith Weir. The session involved Judith giving us some insight into her early years as a musician and composer, featuring live performance examples of some of her earliest works by tutors working at the Summer School. She discussed her musical influences (which ranged from folk to opera song), and how these musically conflicting genres have shaped her compositional methods.

Judith shared with us that she wrote her first opera song at age 24, titled, ‘King Harald’s Saga’. It’s a rather unique piece, being a three act grand opera written for solo unaccompanied soprano! The lyrical content focusses on war and the violence that surrounds it, and Judith discussed how the melody of the soprano is used to metaphorically represent the actions described – in act two, the melody moves rapidly between octaves and dynamics, putting emphasis on the occurring combat! Judith presented us with the below video during the session.

Having shown us her first opera, Judith progressed to inform the young composers that it’s important to keep records (either written or recorded) of their early compositions. She stated that;

It’s easy to feel embarrassed by your first few compositions, but in a few years time, you’ll want to look back on them, and they may not seem so bad.

We were also introduced to her fascination in folk music from the southern US states. She showed us some of her own handwritten transcriptions made from old recordings of this music, and how by doing so she learned a great deal about the musical shapes, harmony and rhythm of the genre. Judith explained how she came across experimental methods of playing the instruments these pieces were written for – one piece in particular involved various methods of playing the cello, including left hand hammer-ons, slapping of the strings, and even foot stamping whilst playing! These insights were greatly appreciated by everyone.

To close the session, she answered various questions which the students had prepared in advance. Her engagement with the young composers was incredibly refreshing. She offered her honest opinions about the future of new music and how this will be created, admitting that this could potentially be with more electronic sounds as opposed to that of live instruments that she had the pleasure of using throughout her career. Regardless, everyone present learnt a great deal about composition and how to approach their writing.