It’s the last full day of composing for some and that has meant that many are going into overdrive mode to get everything finished. There’s a hushed air of concentration across the Purcell School and the IT suite has been full to bursting with composers using sibelius, perfecting their scores, making final adjustments and printing parts for their musicians to rehearse all day. 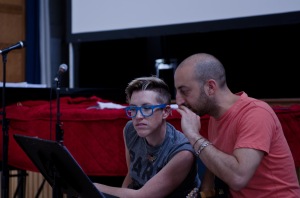 The Vocal Composition students have had the opportunity to try their compositions out with all of the musicians together and hear their ideas performed for the first time. This can be really useful to help iron out challenges that performers might have. For example, in one piece for 3 vocals and very occasional piano (most of it plucked on the piano strings) it became apparent that the singers were finding it very difficult to maintain their tuning. There was a piano chord at the start, then the pianist simply bushing the strings inside the piano with a series of beautiful clashing seconds in the voices for a number of bars followed by a unison piano – vocal section at the end. It transpired that it was very difficult to stay perfectly in tune with the piano without a point of reference for the singers. The solution was to add in a few chimes from plucked piano strings through the previously exposed section in question. The final effect was actually quite spine tingling and really enhanced the piece as well as making it much easier to perform!

Back over on the film music course the compositions were coming to a close as the day progressed, recording officially finished at 4pm and parts were handed to performers to rehearse for the live performance. This left time for adding effects, manipulating the sound worlds and mixing the final products down ready to prepare them for the concert tomorrow. After supper, several even managed to ‘bounce’ their tracks down (produce a mix that they can listen to on another computer) so that they could try it out on the larger PA in the concert hall. This was very useful as it’s really important to hear what larger speakers are capable of and whether the composition needs anything added to it to take advantage of the sub frequencies and the power that a larger concert system provides. For most of our pupils it was their first experience of using such powerful speakers and they realised they could add a lot more to their compositions and they could extend their ranges a great deal! 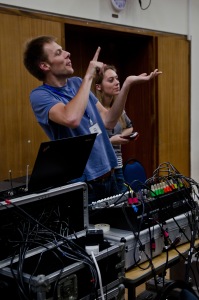 As the course technicians, tomorrow is a busy day for Matti and I. The morning consists of setting up recording facilities for the Advance Composition course, the Composition for Voice course and the Cross Cultural Composition course. In the afternoon we will be sound-checking and adding the finishing touches to the film music compositions before the live show with the musicians in the evening. immediately after the film concert we will be going straight into the Jazz concert for our “late night” show. After which we have to clear away to make space for the Saturday shows. It’s going to be a busy day for us!